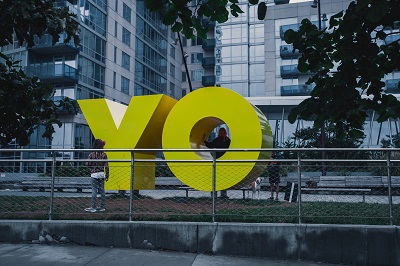 Many people may greet their friends with Yo or even start a conversation with this, instead of saying hello.

It raises the question of how to respond appropriately to such a brief statement.

When a good friend says Yo, all it takes is a quick nod, reciprocate Yo yourself or reply with “What’s up?”. When a stranger says Yo as a warning or provocation, you do not have to respond.

Some friends may automatically answer with Yo whenever you call them. This may be immediately followed with a question or they may simply say Yo and then wait for you to say something.

For example, after they pick up the phone they might say:

Your response will vary according to what they say. If they simply answer Yo and you want to be certain that you’re talking to the right person, you could say:

You never know when a brother or someone who just happens to be around, may pick up the phone and answer it, so it’s good to identify all parties early.

If you’ve clearly identified the person by their voice or they answered with Yo, along with their name, you can move on to identifying yourself.

“This is Shaniqua. I’m calling about the ad.”

In the last example, the caller might not know the person they’re addressing. If you’re doing business, it’s best to stick with the greetings you’re comfortable with in response. State who you are and the purpose of your call.

As the caller, you often understand who you want to talk to and why you’re calling. However, the respondent may not necessarily have all that info. They also may not know what questions to ask, so after Yo, the ball is in your court.

Yo may be used as a greeting when someone sees you in person. This greeting may be accompanied by a smile, wave, or hug. You’re usually expected to return a greeting that’s delivered in a friendly tone, especially if you know the individual.

You never have to say Yo in return. You could use a verbal greeting that you’re comfortable with, such as:

Nonverbal responses are also appropriate. For example, if the person is some distance away and you’re not comfortable shouting, you could give a cheerful wave or even a thumbs up.

Your nonverbal greeting may vary according to how well you know the person. The physical setting may also help to determine your response.

If you know them well, you may be happy when you hear their greeting and you might hug them right away. If they are someone you don’t know, a courteous but more formal greeting such as a polite nod may be appropriate.

A nod wouldn’t involve any physical contact and works well in most social interactions, allowing you to return the greeting without putting yourself at risk physically. For example, if a stranger greets you with Yo at a convention, a nod is a safer option than a fist bump.

If someone who you know greets you with Yo but you’re t sure how they view you, a nod is also a good option. Nonverbal responses like an elbow rub may also be appropriate. This may sometimes be a better option than a fist bump.

Phone calls or interactions that take place in person build better bonds than texting. [1] Despite that, texting is a common method of communication.

When someone sends you a text with just one word and that word is Yo, you might not be sure how you should respond.

After all, you may not even have emojis to make you certain of the emotions that are involved.

Usually, that Yo will just be a friendly greeting. It’s that person’s way of finding out how you’re doing and keeping in contact with you.

You could reply with:

Just saying Yo in reply keeps the conversation short and sweet. Asking how the other person is doing allows them to give a little more detail on what’s happening. You could even send a winking emoji or another type of emoji in this case.

There was even an app that’s ideal for minimalists who want to stay in touch. The YoApp maximized the power of Yo, letting you tell your friends that you’re thinking of them or strengthening your friendship, with just one word. The only word you were able to send or use in response on that app was Yo. [2]

In this sense, texting Yo to a friend is like poking them or winking at them. It’s quick, fun, and communicates that you see them.

You can respond with Yo without worrying over whether the other person understands that your brief response is not due to a lack of love.

Yo As A Warning

People may sometimes shout Yo as a warning. This may occur when another person is getting too close to a boundary.

That boundary may often be physical. However, Yo may also be used when another person is getting too near to a personal boundary or has already violated a boundary and is putting their wellbeing at risk.

If you’re walking around a construction site without permission and you’re not in safety gear, someone might shout Yo to get your attention.

The same thing might occur if you’re wandering too close to the edge of a cliff. Someone may shout Yo before you get so close that you’re at risk.

If you’re having a conversation, Yo may also be used as a warning. For example, if you start straying into a topic that’s not appropriate for the company you’re in, someone may say Yo and even shake their head.

If someone is saying insulting things, another may say Yo to grab their attention before the situation worsens.

In these cases, prompt positive action is the ideal response, if you’re the person who’s being warned. Don’t continue along the path you’re on because very little good can come of doing things that way.

Take a deep breath in and walk away.

Sometimes Yo is used to provoke you. In this case, the person may be unable to resolve a disagreement peacefully, without a firm stance from you.

For example, they may say:

“Yo, Sharon. I heard you’re not playing for our team this year. Why not?”

“Yo, Brianna. Your presentation wasn’t so hot.”

The inflection, body language, and such will tell you that this Yo is not a friendly one.

You can decide to cool down their fire with a peaceful response.

Often, that works better than fighting fire with a heated response of your own.

While most people are okay with using Yo with friends, some people aren’t. This may be because of their associations with that greeting. It’s not usually meant to be offensive among friends but if you don’t like it, find a courteous way to say that.

Some women prefer that men text or otherwise greet them with Good Morning instead of Yo. If that’s you, indicate what your preferred greeting is and keep reinforcing that.

For example, if a man shouts Yo at you and you feel the tone is disrespectful, let them know. If they text Yo and you think as a gentleman pursuing a love interest, their tone should be different, make that clear.

Some women choose to simply not respond if they don’t like it. Others may respond with a description of their expectations, making it clear that they won’t be responding in the future.

It does depend on context, the tone, and what feels right for you.

People may say Yo to you when they’re walking by. If someone is jogging or is otherwise in motion, all they’re doing is greeting you. They don’t expect you to give them a lengthy response.

A nod or just saying Hi is usually enough. If you extend the conversation while they’re rushing by you, they may actually get confused.

If they slow down while making eye contact, they might be interested in an extra minute or two of conversation. If they actually stop, they definitely want to talk to you.

Yo as A Greeting

Yo has a long history and is actually said to have its origins in 14th century England. At least, that’s the most recently known situation in which it was said to be used among people who speak English.

Its use in conversation is also prevalent in countries where English is not the spoken language and this predates its use in England. Many people nowadays associate it with youth in their own country.

Its popularity in modern times has been boosted through its association with music and its use among both Italian Americans and African Americans in Pennsylvania.

Yo has even been used in the military as a response in some situations, such as in roll call.