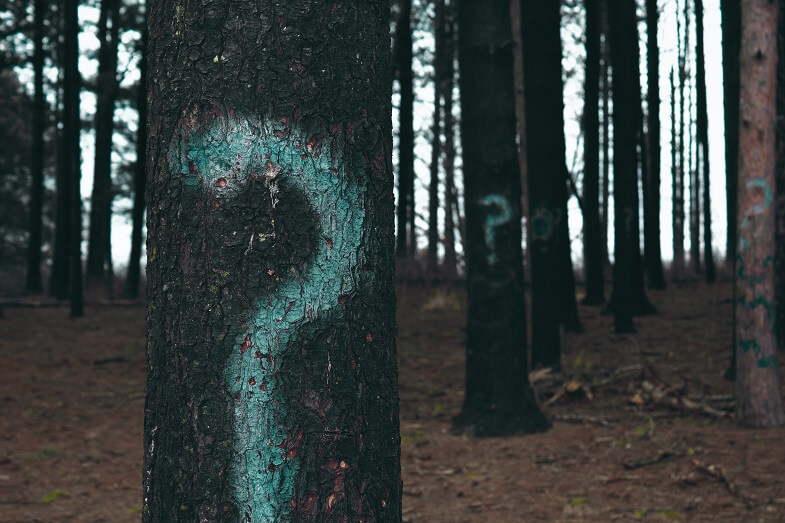 The writing, whether through an email, a text message, or in a letter, must meet certain parameters so that the message can be understood in the best possible way as if they were speaking face to face.

Punctuation marks play an important role when writing, whether to pause (period, comma), to give intensity or emphasis to a sentence (exclamation), or to ask a question (question mark).

The question mark is important for asking questions, and many people tend to write several marks to show greater interest in the question.

The following table gives you an overview of when it is considered rude to use multiple question marks:

We will see in more detail in this article when its use is correct or not.

Table of Content show
1. Repeated use of question marks
2. What should I do if I receive a message with multiple question marks?
3. How do I go about asking an ironic, sarcastic, or rhetorical question?
4. Conclusion

Repeated use of question marks

It is common to see in an informal email, or when chatting on WhatsApp, the repeated use of the question marks at the end of the question, as follows:

Hello Lucas, I need to speak with you about something. Are you at home???

Tony is having a party on Saturday night; do you want to go with me???

But you should know that grammatically speaking, the repeated use of question marks can be rude, depending on the context.

The writing rules establish that the question mark (?) must be used only once when asking, but the exclamation point (!) can be used up to a maximum of 3 times (!!!) to give more emphasis to the phrase or sentence.

John, did you fall asleep? You need to be at school right now or you will miss the exam!!!

The movie you recommended was very good!!! When does the second part come out?

This chocolate is very tasty!!! I had not tasted one as good as this in my entire life.

Since the cited rules explain that one or more exclamation marks can be used as an exception or special use, question marks, for their part, should not be used or allowed (only one).

The explanation of the above is due to the intensity that the exclamation mark can give to the phrase since literally, you can “shout more” while using several question marks does not mean “ask more”.

Even knowing all of the above, it is normal to continue reading this type of “error” in a chat, an email, or even in publications, since many people write with abbreviations, idioms, emoticons, and why not, several question marks.

It is not a crime to write a question with two or three question marks, but depending on the context or the person to whom the message is directed, it can be read or sound a bit annoying, or even rude.

Look at the following examples to get an idea:

Have you finished the job I sent you??? Remember that you have to deliver it as quickly as possible.

Are you going to pay me today??? It’s been a week since you asked me to borrow money.

Why don’t you answer the phone??? I need to talk with you urgently.

Perhaps the sender wants to emphasize the question, without sounding offensive or annoying, but the receiver may take it that way, so it is best to use a single question mark when asking the question.

Suppose you write a newspaper article, a circular for your company, a report, a blog, a response for a forum, etc. In that case, it is essential to adhere to all the possible rules because your interlocutors are varied and need a standardized message, with all the help explicit possible to decode correctly.

If it is a conversation with a family or a friend, there is nothing serious in “breaking” a rule that does not alter the sentence’s meaning.

Didn’t you see the new clothes I bought??? I got it on Amazon at a discount.

Next week is the Super Bowl. Don’t you plan to come to my house to see it as a family???

When will the new Netflix series be released??? It is going to be very good.

What should I do if I receive a message with multiple question marks?

The main thing you should consider is the person or company that is sending you the message. Do I know her from before? Is it a close friend? Is it my boss from work? You have first to identify the level of trust you have with the sender, to know the context in which the message is being written to you.

Let’s look at this first example, where the use of question marks is “passable”:

“Hi Albert, how’s everything going? Do you remember the address of the company we visited last week??? I need it urgently. Cheers!”

In the example above, it can be noted that the sender, when addressing by name and asking how Albert is doing, is an acquaintance. The context of the situation, is in a bit of a rush and needs the information as soon as possible, and prompts him to ask the main question with three question marks.

Is it grammatically incorrect? Yes. Is he rude? No.

Why not? It is a somewhat informal and trusting conversation, although it does not take away the fact that he is misusing the three signs when asking.

Now let’s look at the following example, where the use of signs can be seen to be a bit rude:

“Good afternoon, Boss. The last time we chatted, we had agreed on my salary increase. Could I know when will be the day that it will be paid??? I’m waiting for your answer, greetings!”

In this case, from any point of view, it can be noted that the question has a tone of aggressiveness or annoyance, as if it were claiming, even though it was not its intention, it was not expressed in a bad way, and it was not disrespectful in the rest of the writing.

Given the escalation to which this question appeals, it is understandable that his superior interpreted the question marks together to indicate a high and inappropriate tone of voice in such a circumstance.

Let’s reread the previous example, but this time, with a small change:

“Good afternoon, Boss. The last time we chatted, we had agreed on my salary increase. Could I know when will be the day that it will be paid? I’m waiting for your answer, greetings!”

Different, right? The message is a little more respectful, especially if the boss is someone who is not trusted. It’s a more polite way to remind him without being rude.

How do I go about asking an ironic, sarcastic, or rhetorical question?

Finally, let’s talk about an option that you could use in informal writing to ask a question with some irony or rhetorically: the interrobang.

What is an interrobang? It is a relatively new sign, and although it is not grammatically accepted or standardized, its use has spread, especially in informal writing.

How is this written? It is a simple question mark followed by an exclamation point (?!), or vice versa (!?). You will also find the two signs in one (?!?, !?!), but this is not very common in writing. No matter which one you choose, all three are the same thing.

How can I use it? Check out these three different uses and examples:

To ask a rhetorical question.

Until when am I going to keep making the same mistake?!

But what about her?! What are you thinking of doing that?!

To express disbelief or excitement when asking.

– Ben: I’m going on a date with Mary tonight.

– Troy: Are you going out with her?! That’s not what I expected.

To ask a question excitingly.

– George: Steven, look at the shoes I bought, do you like them?

– Steven: How much did they cost you?! They look excellent.

Remember that it is not a standard symbol of writing, so its use is not correct, but unlike the three question marks, it is more recognized and its use may seem “normal” to the reader. Use it only in informal language: text messages, mail between acquaintances, letters, etc.

As we pointed out above, the use of multiple exclamation marks is accepted, but not question marks.

When talking about the repeated use of question marks, we must know the difference between “MUST” and “CAN.” You can write a question with the two, three, or as many signs you want in a question, perhaps for everyday use or seeking to emphasize the problem, but you have to know that you should not write them because you would be making a grammatical error.